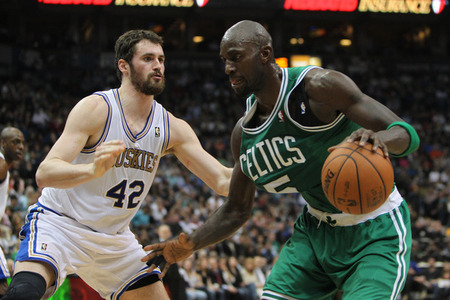 The Celtics were able to do last night what most teams have been unable to do for most of the season – neutralize Kevin Love. The T-Wolves power forward has been putting up ridiculous numbers this season with ease. He had three 40-point games in March alone and fell just 9 points short last night of scoring 500 points in March! The Celtics were able to limit Love to just 22 points and 11 rebounds, and that greatly affected Minnesota’s productivity throughout the night.

Another big performance by Kevin Garnett (24 points, 10 rebounds) against his former team gave the Celtics all they needed as they cruised to an easy 100-79 win. Also making big contributions were Rajon Rondo (17 assists), Paul Pierce (21 points, 9 rebounds), and Avery Bradley (17 points). Greg Stiemsma had another great defensive game while also shooting  4-4 from the floor for 8 points and grabbing 5 boards.

Derrick Williams and Luke Ridnour and 14 and 15 points, respectively, for the T-Wolves, but other than that, the rest of the team did not contribute much as the Celtics continued to build their lead throughout the game. Although the T-Wolves played the Celtics evenly in the 2nd and 3rd quarters, a hot start and a strong finish are what made the win so easy for Boston. The C’s outscored Minnesota 52-32 combined in the 1st and 4th quarters, which crushed the T-Wolves fighting spirit.

The win moves the Celtics to 29-22 on the season, jumping ahead of the 76ers for the Atlantic Division lead after Philly’s loss to the Wizards last night. The Celtics are the 4th-seed in the Eastern Conference for now with 15 games remaining in the regular season. Boston returns home to face the Miami Heat tomorrow at 3:30pm.